This is now pretty old.

Web development has grown a lot since this was written in 2015. This case study shows outdated techniques, and sometimes also some naiveness. Be aware.

If you want to know how to create application such as Enboard or you're interested in my workflow then you should read this.

This article consists of two parts. First is about design and second is about technical matters. If you aren't interested in design then just skip that part.

I want to point out that it's my first ever written article and it won't be perfect (English is my second language) and not as complete as I would like it to be.

After I've started my web design adventure I have amassed a big number of related bookmarks with articles, fonts, services, etc. Organizing everything and accessing it with a browser default bookmarks manager was getting really tiring so I've looked into some bookmark managing services like Delicious etc. but unfortunately nothing cut it for me.

That's when I've got an idea to create a simple static page hosted on GitHub where I could keep all my bookmarks organized through categories in a way I liked to. It was named DopeLists.com and at the beginning it only consisted of web design links. Further down the road I've added other sections like front-end, after format and general websites.

* Original repo with all the commits still exists, btw.

A couple months later I've redesigned and refactored it a bit because of bad markup decisions and time-wasting way of adding new links. Name was also changed to Beaqn.in.

The website got a bit popular, shared many times and received good amount of e-mails with positive feedback and suggestions.

Among the user feedback there were many questions if Beaqn source code could be used for their own lists. That's how I've got an idea to create such web app where people could do exactly that, but without messing in code. 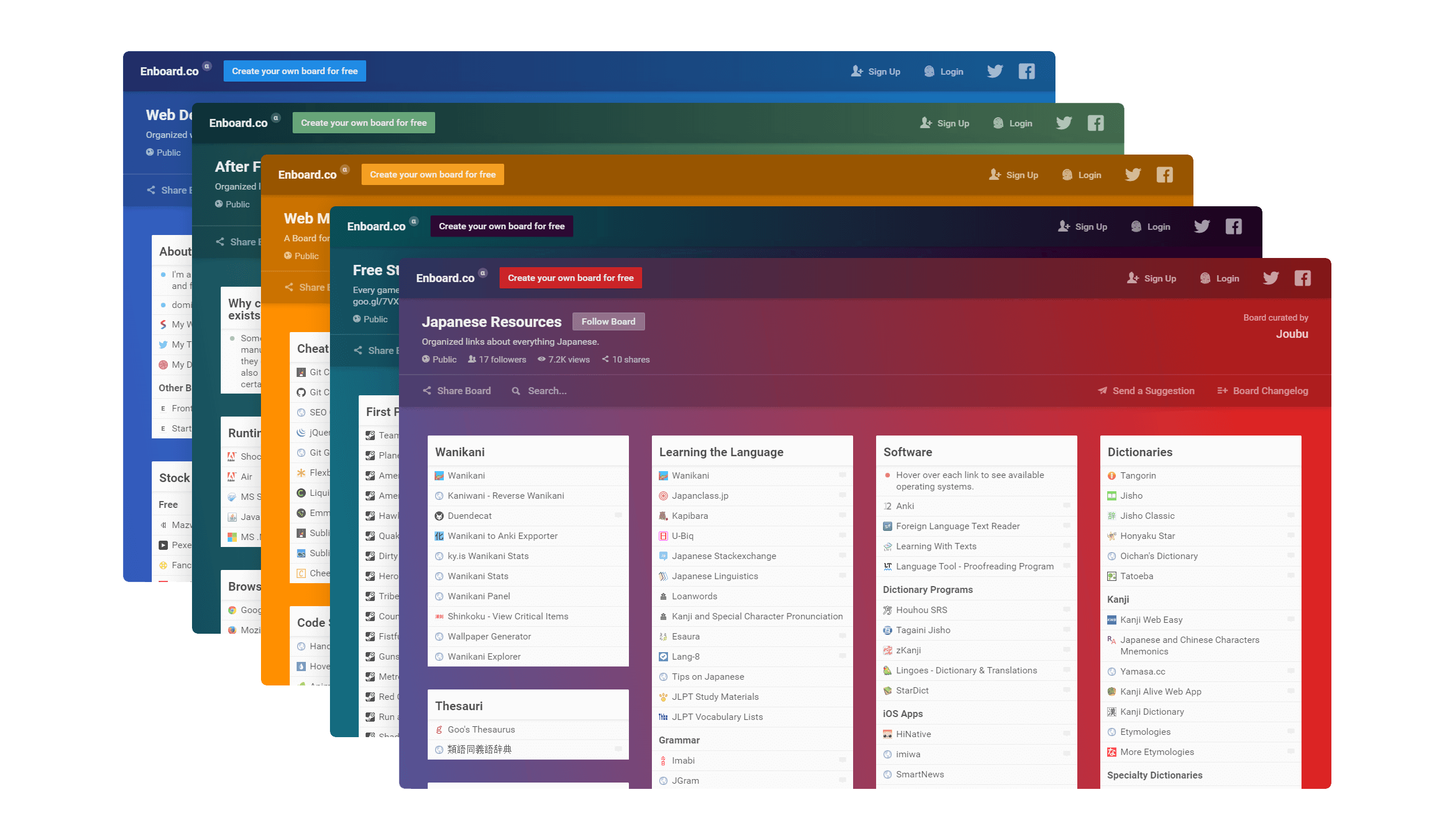 To convince users who haven't already registered I've included a CTA button in top bar. It lets them know that they can also create such board for free.

Loosely in the spirit of a separation of concerns — there are two sections inside board header. First one is mostly informational with things like board title, description, number of followers, etc. Second one contains options associated with that board.

Only exception is the follow button which I've included right after the board title because I wanted it to be more visible and used more often than the other options.

To keep things simple and clean, board is reduced to only essentials — items with optional hover descriptions organized through categories.

That results in a glanceable and optimally packed content that can be quickly explored and accessed by users.

Drag and drop interface lets board owners to easily edit placement of categories and items.

Every board have a search functionality. It basically works like a browser find feature (this little thing activated with CMD+F) but with one difference — boxes that don't match search results are hidden.

Everyone can make suggestions to public boards. Boards owners are notified when suggestion is sent and then can review and delete them. Suggestions are also automatically marked for read and unread.

Items addition, modification or deletion gets logged in the changelog that can be seen by anyone with board access.

Different types of actions have different icons and are color coded for quicker visual scanning. Useful when there's lots of them.

Boards are using top level directory after domain name because I wanted them to be memorable and easily accessible.

Every new board comes with a 6-character long unique alphanumeric string. The owners can add another custom slug which is not taken by another board and not used by other restricted Enboard URLs.

That way board creation is faster and people who don't need specific board aliases (e.g. in private boards) aren't forced to take names that could be used by other users.

All the application code, static files and PostgreSQL databases are hosted on a Ubuntu 14.04 Linode VPS.

* I was considering using similar DigitalOcean but Linode looked more mature and trustworthy.

For web server I've chosen Nginx because it was easier to configure, better suited for Django applications and overall more faster than Apache (basing on my research). It serves two purposes. First is a proxy to a Gunicorn which executes Enboard application. Second is a server for static files.

Upstart is automatically stopping or starting Enboard application on system events like boot-ups or crashes.

In addition I'm using CloudFlare, which is basically a plug-and-play CDN, cache, security protection and some other things. It also lets visitor know when the website is down.

I was working on Enboard all by myself and I wanted to have fast deployment times since I knew I'll reiterate and update it a couple times a week. I've opted for a simple GIT deployment where I push local changes to BitBucket repository and pull them from Linode server.

* Instead GitHub I've used BitBucket because it has a free plan with unlimited private repositories.

My CSS preprocessor of choice is the Sass. Its import feature let me to have modular stylesheets structure based on BEM methodology and loosely on SMACSS. Sass other features like mixins, variables and logic operators also came in handy.

* I just love that you can write normal CSS and it will also be a valid Sass.

In addition I've used Autoprefixer postprocessor — that way I didn't have to worry about manually adding browser vendor prefixes like -webkit- or -ms-.

All the CSS and JavaScript are watched, built and minified using Gulp.

* For me main advantage of Gulp over Grunt are faster build times. 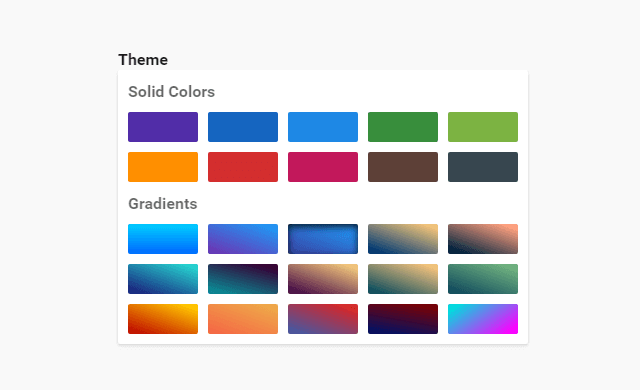 Every board can be customized with 25 themes. They are implemented with the help of Sass mixin and icon fonts features.

* Icon fonts are really useful. They are vector based so their size, color and some other properties are easily changeable.

This lets me to quckly add new themes and easily change whole board theme using only one class in html that overwrites colors of specified elements.

"Speed is the most important feature. If your application is slow, people won’t use it."

Bigger boards had a very long server response times because they contained a lot of items with many database relationships.

I've solved that issue by getting items using AJAX after initial page load. While it didn't solve the response time issues, it made the first request for website look a lot faster.

To take things a step further I've also deferred other loadings like board creator and changelog.

To fight something called FOIT (flash of invisible text) I've plugged in a neat script called Font Observer that — as the name suggests — is observing font load requests and returns callbacks that make possible to apply custom font only after it's loaded.

Really useful, especially on smartphones where font loads aren't that snappy like on desktops.

While we are speaking about fonts, we may also speak about icon fonts. I've used selected entypo+ icons packaged as a font. This resulted in the only one ~13kb request for all of the icons and because they are vector based, they look crisp on high-density displays and also let me to easily customize their color and other properties.

To miminize page load speeds, especially on smartphones I didn't used any external sharing widgets. They are really big performance hogs with their bloated scripts and iframes.

* I didn't have success in completely eliminating 3rd party scripts because I'm using Google Analytics and HotJar which require these.

For displaying cumulative share numbers I've used custom back-end script that counts shares every 6 hours using selected APIs of social networks. The final share number is updated in database only when it's larger than preceding number.

For tracking user bahavior and gathering feedback I'm using HotJar. It's a really useful tool that I could describe as a "swiss knife" of analytics.

On Enboard; click heatmaps and screen recordings were used to detect and solve usabilty issues along with polls and surveys to gather feedback.

Things That Should've Been

I might implement them in future but right now I've had to stop working on Enboard and to focus on other things that are going in my life and on other projects. One of them is GGather.

Enboard couldn't be made single-handedly in such a short span amount of time without articles, libraries, tools and services listed below.